Posted on November 5, 2015 by filterbuddy 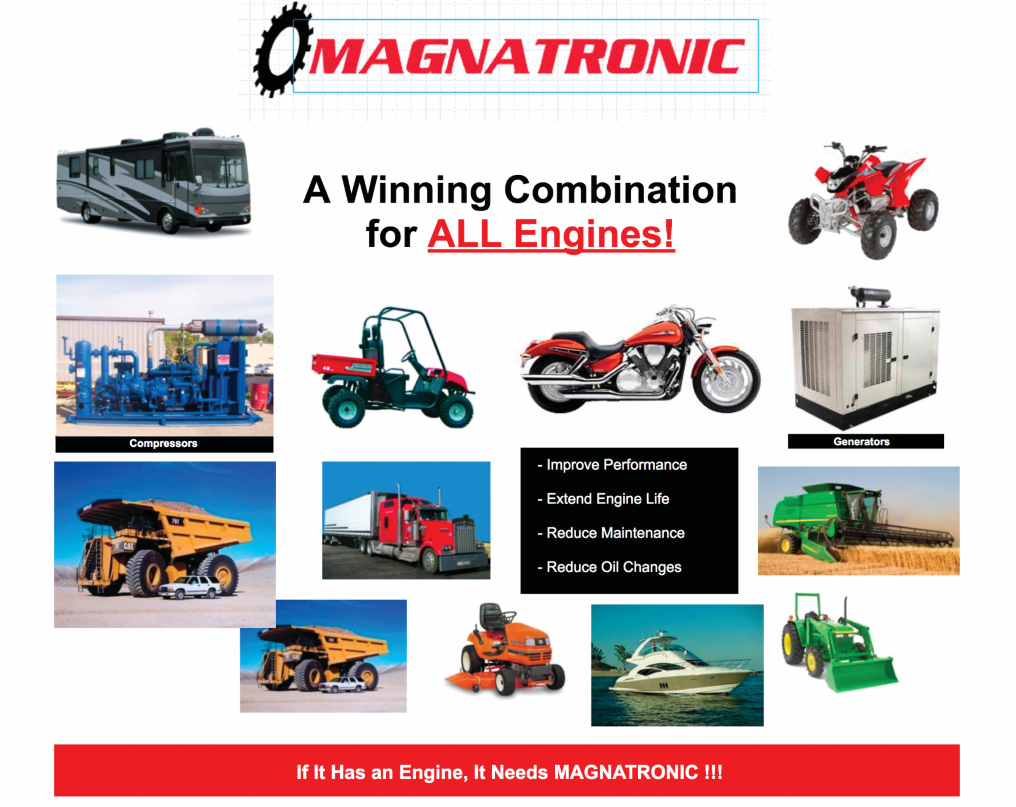 Nothing works like Magnatronic to extend engine life, significantly improve performance and increase engine life by as much as 5 X Times!

LEARN WHAT CAUSES DAMAGE TO ENGINES AND HOW MAGNATRONIC SOLVES IT

Magnatronic uses a revolutionary way of removing particulates from liquids!

Magnatronic uses neodymium magnets, 600 times more powerful than a standard magnet. When attached to the existing filter, Magnatronic transforms the entire filter into a powerhouse capable of removing all sizes of particulates. 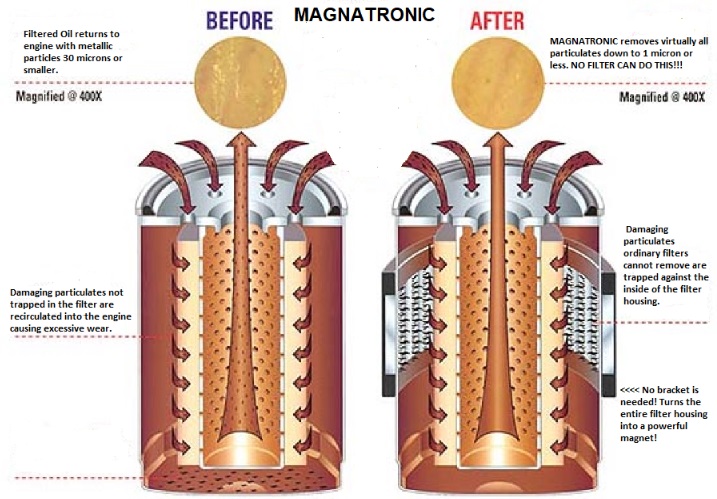 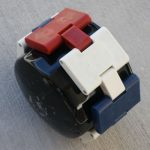 Clearance-Sized Particulates (CSP) do the greatest damage to engines!

Here is a report prepared by the National Filter Manufacturer’s Council on CSP’s: 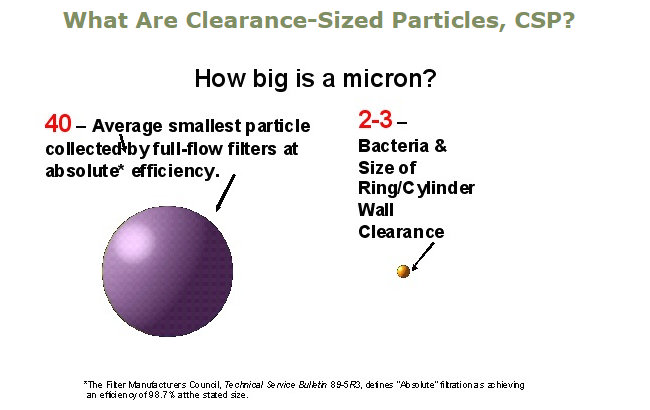 Particles in the oil film moving within the clearances between the moving parts are called Clearance-Sized Particles or CSP’s.

The majority of the clearances between the engine’s moving parts are between 1 and 10 microns, hence CSP’s are primarily in the 1 to 10-micron range. 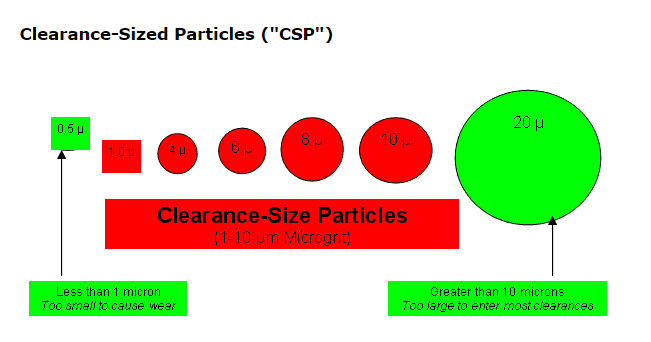 The CSP’s cause the majority of engine wear and friction. CSP’s have been called “liquid sandpaper” to describe the insoluble slurry of micro-particle, which is continuously recirculated between the moving parts, causing additional wear and friction within the engine’s moving parts, such as the piston rings and cylinder wall, rod bearings and piston pin bushings.

Illustrated below is a typical engine clearance. The size of the oil film between a cylinder wall and the piston ring is approximately 3 microns, the size of bacteria. If the 3-micron oil film is not carrying an abrasive clearance sized particle, there is minimal wear. If the oil film is dirty, carrying CSP’s between these parts, significant wear and friction will be created. 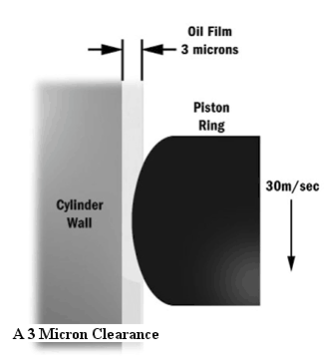 What are the sources of Particle Contamination?
There are three major causes of particle contamination:

No. Engines have at least one full-flow filters. It operates inline with a high oil flow rate, typically 12 to 15 gallons per minute at 170-200 degrees with a 25-65 psi. Full-flow filters can filter down to approximately 30-45 microns on average with absolute efficiency (iY 98.7%) but cannot prevent the buildup of 1 to 10-micron contamination.

The Full Flow filter is directly between the oil pump and lubricated parts. All the oil from the oil pump must pass through the full-flow filter before it enters the engine to lubricate and cool the rapidly moving parts.

To avoid starving the engine of lubricating oil, the filter media must be relatively porous and is usually made from synthetic materials.

When the full-flow filter is offline, there is no engine oil filtration.

Without a doubt, MAGNATRONIC is the solution that makes more sense! Without brackets or complicated installation, you can put MAGNATRONIC to work on your oil filter instantly and get the protection only MAGNATRONIC can provide!

MAGNATRONIC, with 600 x the power of a regular magnet, transforms your existing engine oil filter by magnetizing the filter housing. As oil flows through the engine and into the filter, particulates that are not trapped in the filter media are trapped against the inside of the filter housing until the filter change.

Click HERE to find out more about MAGNATRONIC and to Order!

Yes! General Motors published a SAE report on the relationship between small micron particle contamination and engine life. The test evaluated the impact of cleaner oil on engine life.

The GM study reported that when the lubrication oil is filtered down to 7 microns, engine wear is minimized, and relative engine life is more than five times longer. The following graph illustrates the relationship between particle contamination and engine life:

Proof positive you need a MAGNATRONIC for the job! Imagine the payoff with companies who operate fleets!

One More Engine Oil Filter Study further proving the need for a device like MAGNATRONIC!

The SAE J806 test uses a single-pass test, checking for contaminant holding capacity, size of contaminant particles trapped, and ability to maintain clean oil. As an amendment of the J806 test, the multi-pass test also looks for filter life in hours, contaminant capacity in grams, and efficiency based on weight. The efficiency of the filter is determined only by weight through gravimetric measurement of the filtered test liquid. Typical numbers for paper filter elements are 85% (single pass) and 80% (multi-pass).

The SAE J1858 test provides both particle counting and gravimetric measurement to measure filter capacity and efficiency. Actual counts of contaminant particles by size are obtained every 10 minutes, both upstream (before the filter) and downstream (after the filter), for evaluation. From this data filtration ratio and efficiency for each contaminant particle size can be determined as well as dust capacity and pressure loss as a function of time. Typical numbers for paper element filters are 40% at 10 microns, 60% at 20 microns, 93% at 30 microns, and 97% at 40 microns.
CHOOSE the right MAGNATRONIC for your needs!
Standard for cars, light trucks, lawn tractors, atv’s,  motorcycles,  snowmobiles .
MAGNUM for trucks, farming equipment, construction machinery, logging machinery, evaporators, yachts and many other applications.

You can even expand Your Magnatronic or Make Your Own Filter With These Links!

You do NOT have to open a Paypal account when you click the button to pay with Paypal.com. You can use “Express Pay”!

Posted in Uncategorized | Tagged checkout | Comments Off on Checkout

A Revolutionary Way to Filter Liquids

Posted on November 9, 2015 by filterbuddy

Don’t replace the filter. Let all that “gunk” bypass the filter! That’s the word from John Mauldin, owner of the patented Magnatronic solution to filtering liquids.

Here is what makes his device so unique: Magnatronic allows the suspended particulates to bypass the filter yet insure that both ferrous and non-ferrous particulates are removed.

How does his device accomplish this feat? Simple!

Magnatronic is a device consisting of magnets that are 600 times more powerful than a typical magnet. When attached to a filter housing, as liquids not filtered pass along the inside walls of the filter, the particulates are drawn to the filter wall where they become attached until the filter is replaced.

Mauldin assures us that the particulates will NOT wash off the filter housing because of the strength of the magnets. This is really good news for trucks and cars where small particulates do the most damage to engines but filtering sub-micron particulates is an impossibility as it would cause starvation and cavitation.

“The number of applications for Magnatronic are mind-boggling”, according to Mauldin. “Everything from cars and trucks to ships, tractors, heavy machinery….. the list is endless!”